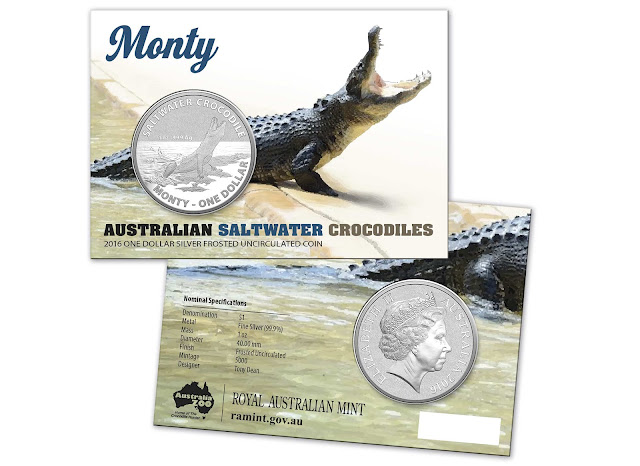 The fourth crocodile to be featured in the annual Australian Saltwater Crocodiles series, a proud twelve-year collaboration with Australia Zoo. The Australia Zoo family has always seen another side to them with the Crocoseum providing the opportunity for visitors to discover their beautiful, graceful and playful qualities.

Monty is one of Australia Zoo’s star crocodiles, who has been treated and raised with love since he was captured in 1975. He has been nurtured over the years, and grown to an amazing 3.7 metres and 400 kilograms. As well as being a star attraction to many Zoo visitors, he also starred alongside Steve and Terri Irwin in the 2002 film The Crocodile Hunter

The Pobjoy Mint’s newest colorful titanium coin, issued on behalf of the British Virgin Islands government, features the powerful great white shark. In addition to the turquoise titanium $5 coin, an Uncirculated copper-nickel dollar and a Proof .925 fine silver $5 coin with the design are also available.
The great white shark (Carcharodon carcharias) is a species of large shark that can be found in the coastal waters of all the major oceans. Great white sharks are estimated to live as long as 70 years or more. The great white shark has no natural predators other than the orca and is one of the primary predators of marine mammals.
A great white has a white underside and a gray dorsal area. This coloration makes the shark difficult for prey to spot, because it breaks up the shark’s outline when seen from the side. From above, the darker shade blends with the sea, and from below, the shark’s silhouette against the sunlight is minimized. 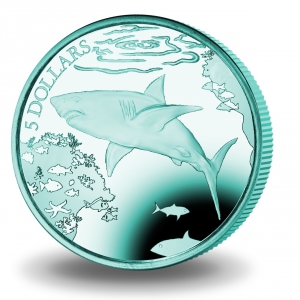 The reverse of the coins shows an underwater scene with a central image of a great white shark. The obverses carry an effigy of Queen Elizabeth II exclusive to the Pobjoy Mint.
Titanium is exceptionally difficult to strike and, because of the way the colored titanium reacts when striking, no titanium coin is exactly like another. A lined effect also present on the coins is unique to this metal.
COIN SPECIFICATIONS:

Also Available are Copper Nickel and Silver Proof Versions - The Uncirculated copper-nickel dollar and Proof silver $10 coin each weigh 28.28 grams and measure 38.6 millimeters in diameter. The $1 coin has unlimited mintage and retails for $16.95. The $10 coin is limited to a mintage of 10,000 pieces and retails for $65.
comments powered by Disqus
Posted by AMAZING WORLD at 1:27 PM No comments: 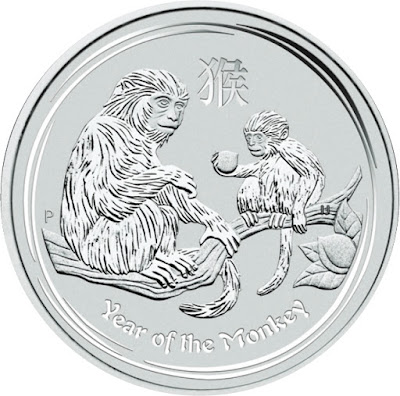 This Silver coin celebrates the ninth animal in the 12-year cycle of the Chinese zodiac. In Chinese culture, those who are born under the influence of this sign are said to be intelligent, quick-witted, optimistic, ambitious and adventurous.
The 2016 Silver Lunar Year of the Monkey coin features an adult monkey sitting on a branch of a peach tree, which is symbolic of lovevity and immortality.
The Australian Lunar Monkey silver coin is available in the following weights:
1/2oz, 1oz, 2oz, 5oz, 10oz and 1kg

2016 Silver Lunar Monkey available in 1/2oz, 1oz, 2oz, 5oz, 10oz and 1kg
The Chinese character for ‘Monkey’ and the inscription ‘Year of the Monkey’ also appears in the design with The Perth Mint’s ‘P’ mintmark..
The coin’s obverse depicts Her Majesty Queen Elizabeth II, the year-date, weight, fineness and the monetary denomination.
About the Design:
A pattern of lines forming a circle immediately inside the rim, surrounding a representation of an adult monkey and a young monkey holding a peach, sitting on a branch with leafy foliage and a peach to the side.
The coin includes the following inscriptions ‘Year of the Monkey’, the Pinyin pictograph pronounce ‘hóu’ and meaning monkey and the initials of the designer Ing Ing Jong ‘IJ’.
Keywords:
monkey, silver monkey, lunar monkey, perth mint monkey, bullion monkey, silver australia silver, silver coins, silver bullion
comments powered by Disqus
Posted by AMAZING WORLD at 7:04 PM No comments:

The Perth Mint is delighted to offer investors a new bullion coin featuring this majestic bird which is known to soar to dizzying heights.
The coin’s reverse depicts an impressive Wedge-tailed Eagle in mid-flight as it prepares to land on a tree branch. The design also includes the inscription AUSTRALIAN WEDGE-TAILED EAGLE, the 2015 year-date and The Perth Mint’s ‘P’ mintmark.
Each bullion coin is presented in an acrylic capsule, from an unlimited mintage.

2015 Australian Wedge-Tailed Eagle 1oz Silver Bullion Coin
One of our favourite silver bullion coins of 2014, indeed of modern times, the Wedge-Tailed Eagle coin designed by John Mercanti for the Perth Mint had its debut last year. First released as high-relief silver and gold coins with mintages of 10,000 and 1,000 respectively back in January 2014, they followed up with a standard silver proof and a fantastic five-ounce high relief coin last May. This year will almost certainly see new releases of most, or all of those.
The bullion coin, while not as impressive as the completely sublime High-Relief versions, remains a beautiful piece, and if last years mintage limit is repeated, a relatively rare one by bullion standards.

About the Wedge-Tailed Eagle
The Wedge-tailed Eagle is Australia’s largest bird of prey and one of the biggest eagles in the world. Found throughout mainland Australia, Tasmania and southern New Guinea, the Wedge-tailed Eagle has a wingspan of up to 2.7 metres, and displays a long, wedge-shaped tail and feathered legs.
Last year, 10% of the 50,000 mintage was sold by Australian dealer Ainslie Bullion but we’re currently unsure when or if they will be the dealer selling them this year. We understand that any Australian issued coin has to have 10% of its mintage sold in Australia, thus explaining why GovMint don’t get all the coins to themselves. This would indicate that the same would be the case this year, but GovMint do not list a mintage for the 2015 release, so how many an Australian dealer would get is unclear at present. We’ll try to find out.
comments powered by Disqus
Posted by AMAZING WORLD at 3:19 PM No comments:

The Anzac commemorative coin is New Zealand’s first circulating coloured coin, and was minted by the Royal Canadian Mint

One million Anzac coins have been minted and will be released to coincide with the 100th anniversary of the landing of Anzac troops at Gallipoli. This number represents the size of the New Zealand population in 1914, of which 10 percent served in the First World War. The coin was coloured using a revolutionary high-speed pad printing solution, developed by the Royal Canadian Mint and technology partner TECA.

Capable of producing circulation coins with vibrant, photo-quality images, in multiple varieties and blends of colour, and with superior wear resistance, this unique technology is exclusive to the Royal Canadian Mint.
The high-resolution design of the coin was made possible by an integrated system incorporating specially developed inks, robotics for speed and precision control, as well as advanced vision inspection for quality assurance.

The significance of the Anzac coin

The Anzac coin honours the spirit of Anzac that was formed 100 years ago, and continues to live on today.

It is the first time in New Zealand's history that a coloured circulating coin has been produced. The coin will be in circulation as legal tender and available for collectors.

The Anzac coin design features a New Zealand and Australian soldier standing back to back with their heads bowed in remembrance. The mangopare (hammerhead shark) pattern symbolises strength and determination, and the silver fern reflects New Zealand’s national identity.

One million Anzac coins have been minted to coincide with the 100th anniversary of Gallipoli. This number represents the size of the New Zealand population in 1914, of which 10 percent served in the First World War.

The Anzac coin was released into circulation as legal tender on 23 March 2015. It is being sold at its 50 cent face value.

New Zealand Post Group is coordinating the release and distribution of Anzac coins. Coins can be purchased at PostShop or Kiwibank branches, or via NZ Post’s website.

Groups representing former and current armed forces, including Returned Services Association members and Defence Force personnel, were given the opportunity to pre-order limited numbers of coins before they were released publicly.

The Reserve Bank of New Zealand does not have Anzac coins available for distribution.
How the Coin is Made

The Anzac commemorative coin is New Zealand’s first circulating coloured coin, and it was minted by the Royal Canadian Mint.

The Anzac circulating coin has the same specifications as the existing 50 cent coin and testing has shown it will be accepted in coin and vending machines.

The high-resolution design of the coin was made possible by an integrated system incorporating specially developed inks, robotics for speed and precision control, as well as advanced vision inspection for quality assurance. 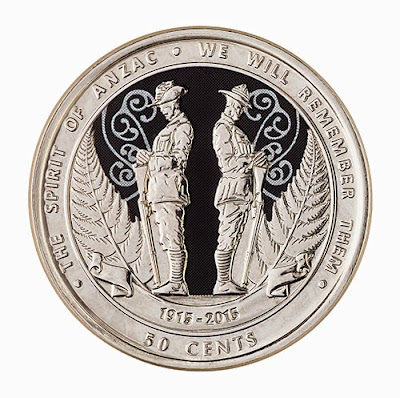 The Reserve Bank of New Zealand has prepared an Anzac Coin Fact Sheet explaining how the coin is made and detailing its specifications.
comments powered by Disqus
Posted by AMAZING WORLD at 5:52 PM No comments:

The Mint of Japan have announced their latest prefecture silver coin which features a well-known landmark or structure as its obverse design.
This coin features the Kintaikyo Bridge, in the prefecture of Yamaguchi which is a historical wooden structure that consists of a series of five wooden arches and spans the Nishiki River in Iwakuni City. Built in 1673 by Kikkawa Hiroyoshi, the third lord of the Iwakuni domain, this bridge is known as one of the three most beautiful or unique bridges in Japan and was designated as a place of scenic beauty by the national government.
The obverse design includes a depiction of the Kintaikyo Bridge and the Akiyoshidai Plateau, which is the largest area of karst topography in Japan, located almost at the center of Yamaguchi Prefecture, and designated as a Quasi-National Park and a Special Natural Monument. 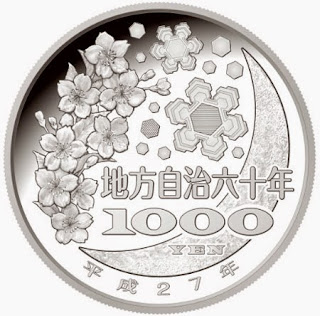 The common reverse design of 1000 yen silver coin: Snow crystals, moon and cherry blossoms. Latent image technology is applied to the center of the largest snow crystal to show the numerals of “47” representing the number of prefectures in Japan, and “60” representing the 60th Anniversary of Enforcement of the Local Autonomy Law appear alternately when viewed from different angles.
Coin Specifications:

The coin, which is the 39th consecutive issue within the series, will be available to order from now until the 30th June when the coin will officially be issued. A 500 Yen bi-metallic coin intended for circulation with the same design though not colorized is also to be issued at the same instance as the silver coin.
For more information on this and other coins available from the Mint of Japan, please visit their website at:http://www.mint.go.jp/eng/buy-eng/eng_coin_international_index.html
For international distributors of Mint of Japan coins, please visit: http://www.mint.go.jp/eng/qa-eng/eng_qa_overseasqa_contract.html Information offered in English and Japanese
comments powered by Disqus
Posted by AMAZING WORLD at 5:11 PM No comments: